View cart “Tea Kit #2: You, Me and A Cup of Tea” has been added to your cart.
Checkout View Cart 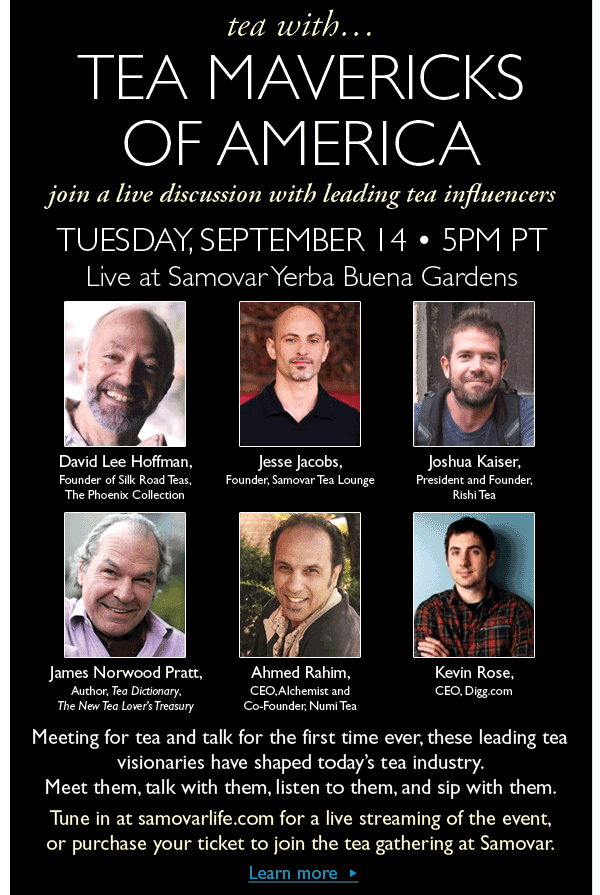 In an unprecedented Bay Area meeting of the world’s foremost tea influencers, culled from a variety of industries including technology firms, retail and wholesale outlets, and literary authors, these savvy entrepreneurs will share insights about why the tea industry is surging in America. Noting the clear benefits such as providing focus and clarity to a distracted and hyper-connected society, these experts will explore, taste, and discuss this fascinating artisan world and its relevance today. They will converse about health benefits, sustainability trends, challenges in the industry, and other topics.

Each participant will also bring along the latest and greatest artisan teas from their collection for an on-camera tea tasting. Never before have these tea impresarios all gathered together. Come learn about what’s currently happening in the tea industry in America, and why, and hear the inside scoop regarding all the new innovations on the horizon.

Here’s more on each of the Tea Mavericks:

Ahmed Rahim is the master blender, alchemist, CEO and Co-Founder behind Numi Organic Tea. Before starting the Numi business in 1999 with his sister, Reem, Ahmed lived and worked in Europe for ten years. In the early part of the 1990’s, Ahmed lived in Paris working as a professional filmmaker and photographer. Ahmed continued traveling throughout Europe and ended up in the German Alps where he continued his artistic expression in the music scene. Ahmed was led to Prague where he spent the next 6 years in filmmaking and photography. During his stay in Prague, Ahmed was asked to help create and design teahouses. He then became a partner in a teahouse and helped expand and grow the business. Ahmed is fluent in English, Arabic, French, German and Czech. He holds a BA in Psychology and Theatre, from New York University, and has studied Film and Photography at various universities in NYC, Paris and in Prague. He is currently studying Architecture to create a sustainable future.

Rishi Tea began in 1997 when Joshua Kaiser, founder and tea buyer, recognized that the traditional handcrafted teas he grew so fond of during his travels in Asia were rarely available elsewhere. Joshua felt that North American consumers would embrace artisan tea as they did single origin coffee and fine varietal wine if they were given access to it at reasonable prices.

Joshua enlisted a well-traveled and longtime friend Benjamin Harrison as partner. The two, along with help from friends, worked in a 400 square foot windowless space in Milwaukee’s Historic Third Ward district, hand-blending original botanicals blends and individually packaging premium teas imported from origins that Joshua frequented. The space was soon outgrown and Rishi Tea moved into the burgeoning Bay View neighborhood. While the production facilities expanded, Rishi Tea preserved its founding principles including unique hand-blending techniques, meticulous hand-packaging and strict quality control. Today, the Rishi team has grown into a passionate group of tea lovers who serve as guides for their customers into the world of premium tea.

About Kevin Rose (CEO of Digg.com)

Kevin Rose, an obsessive tea drinker, spends his time in between podcasting, climbing, digging, and inventing Digg’s next gen features. Prior to founding Digg, Kevin produced and hosted hundreds of segments on TechTV – a cable television network available in over 45 million homes in the United States and distributing content to more than 70 countries. Unfortunately, Kevin’s extended exposure to Digg results in him repeating the words ‘dupe, dupe, no digg’ over and over while sleeping.

Born in Winston-Salem, North Carolina, and brought up on land which has been in his family since before the American Revolution, James Norwood Pratt was educated at Chapel Hill and abroad and published his first book on tea in 1982. He is the acknowledged instigator and prophet of America’s present Tea Renaissance and is quite possibly the world’s most widely-read authority on tea and tea lore, thanks to books translated into multiple languages and numerous columns, articles and print and TV interviews in US and overseas media. His landmark James Norwood Pratt’s Tea Dictionary was named Best New Publication by the World Tea Expo in 2010. He appears in several films and theatrical productions and lives with his wife Valerie Turner in San Francisco.

David Lee Hoffman has been traveling the backcountry of Asia for years seeking out the finest, best tasting leaves. With his 25-year passion for tea and a background in vermiculture and soil fertility, he is now working in China with the prestigious Tea Institute and the Chinese Academy of Agricultural Sciences to implement sustainable organic tea farming.

Please join us at the event if you are in San Francisco. It will be taped live in front of a studio audience (limited to 30 people). If you are not in the Bay Area, please join us online at www.samovartea.com or www.realritual.com. See you there!
Samovar Life
Posted in:
Uncategorized
Join 50,000 Other ♥ Tea Lovers
Follow Us