View cart “Ultimate Beginner’s Guide To Tea” has been added to your cart.
Checkout View Cart

Join us at Samovar Tea Lounge, Yerba Buena for a CD release celebration and performance by Navarasa.

Japanese music has roots in India, so the artists decided to pay homage to the beginnings by using the concept of the navarasa for inspiration.

This CD is based on the navarasa expressed through a combination of shakuhachi, bass, and mouth organ (the Chinese sheng and Japanese shô). The music is mostly improvised, based on the various rasa themes.

The Sanskrit word rasa literally means “juice” or “essence” and refers to the essential human emotional states—that “juice” which comprises our feelings. The Hindu concept of Navarasa, or nine rasa, dates from around the tenth century and elucidates nine basic emotions universal around the world; love, joy, wonder, peace, anger, courage, sadness, fear and disgust.

The rasa are one’s reaction to external stimuli—the forces of the soul manifesting themselves in exuberant expression to the outside world. Each rasa expresses a particular feeling, and a person is composed of the total of these emotions. The big question is, however, how much can one be aware of their own emotions and the power they hold over our lives? The answer lies in how the rasa is used. To create the perfect rasa juice, one must cultivate discipline, hard work, & humility; living each rasa to its fullest without ever losing oneself to any one emotion.

Mark Izu is a Japanese American who has spent his life on the American west coast as a  jazz artist and composer studying Gagaku (Japanese Court Music). Izu’s (Composer, Bass, Sho & Sheng) award-winning musical compositions are an amalgam of ancient Asian traditions fired in smooth jazz. A pioneer in this genre, Izu is known for his seamless mastery of cross-cultural instrumentation and incredible agility in many disciplines.

Izu is a founding member of the Asian American Jazz Orchestra, whose recording received a Grammy nomination in 2000. In 2004, he scored the Emmy award-winning documentary Return to the Valley. In 2002, he completed the score for Kuan-yin: Our Lady of Compassion by Brenda Wong Aoki and featuring his
teacher and mentor, Gagaku Master Togi Suenobu. The work was performed at the Esplanade in Singapore in 2005. 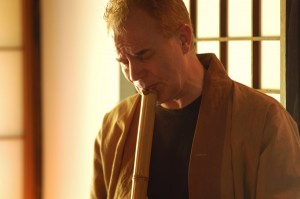 Christopher Yohmei Blasdel is an American who has lived most of his life in Japan studying Japanese music. Blasdel began the shakuhachi and studies of Japanese music in 1972 with Goro Yamaguchi. In 1982 he received an MFA in ethnomusicology from Tokyo University of Fine Arts and received his professional name “Yohmei” from Yamaguchi in 1984.

Performing in Japan and around the world, Blasdel maintains a balance between traditional shakuhachi music, modern compositions and cross-genre work with musicians, dancers, poets and visual artists. Discography includes Breath Play (2007), Visionary Tones (2005) and several other CDs of traditional and contemporary music. He has composed and performed music for NHK documentaries and various films.

He co-organized the World Shakuhachi Festival ’98 held in Boulder, Colorado and was artistic director of the Fukuoka Gendai Hogaku Festival, 2002-2003.

His semi-autobiographical book, The Single Tone—A Personal Journey through
Shakuhachi Music (Printed Matter Press, 2005—originally published in Japanese as Shakuhachi Odessei by Kawade Publishers, 2000 and winner of the prestigious Rennyo Award for non-fiction), details his experiences learning and playing the shakuhachi in Japan and around the world.

He presently teaches Japanese music at Temple University in Tokyo and is Artistic Director of the International House of Japan, Inc. Blasdel is a member of the Japanese performing group, Aura-J and also holds a second-degree black belt in Aikido. His home is in Tokyo.