Tea and punch have a long history together. Some say punch originated in India, where it was made from five key ingredients. (In

Hindi, the word for five is “panch.” Many think this is where the word “punch” originated.)

These five key ingredients were: lemon or lime juice, sugar, water, liquor and vaguely defined “spice,” which could mean something we currently think of as “spice” (like nutmeg), something we would probably shun today (like a whale secretion that’s only used is perfume these days), or (yes, yes) tea.

As punch recipes spread across Europe in the 1600s, they evolved. Mixtures of multiple citrus juices and liquors were employed, and green tea and champagne widely replaced water as a core ingredient.

These innovations became much of the groundwork of the art of mixology, which is enjoying a revival in San Francisco and other major U.S. cities right now.

To date, the benefit to punches over individual cocktails is that the amount of time required for a complex quaff is drastically lower, and you end up with a huge amount of imminently drinkable alcohol. Tea punches are great for larger parties and picnics where you want to serve something sophisticated and delicious, but I don’t want to be the event bartender.

In the U.S., chilled, tea-based punches and simpler iced teas were popular long before iced tea was “invented” (or popularized) at the 1904 St. Louis World Fair. Sweetened iced tea was an instant hit at the World Fair and beyond.

During prohibition, iced tea and alcohol-free tea punches became even more popular across the U.S. as people sought out flavorful, sweet drinks without any legal complications.

These days, iced sweet tea with lemon is a staple in the South. Sugar compliments the astringency of strong-brewed Assam and Ceylon black teas and provides an energy boost for sweltering summer days. Lemon juice brings out the flavor and brightens the color of the brew. And, of course, ice makes the experience all the more pleasant.

However, if Southern-sweet isn’t your cup of tea, there are plenty of other ways to make tea punches that are livelier and more suited to your tastes.

Here are some ingredients to consider for customizing your own tea punches:

Go beyond basic lemon-lime with Seville oranges, yuzu and other exotic citrus fruits, or add new flavor dimensions to lemon-lime by adding its essential oil or zest, or by infusing ingredients with pieces of lemon and/or lime.

Peach, pineapple, cherry and banana are popular, but berries, apple and tropical fruits like mango and kiwi are also delicious.

Use the juice, or get creative with muddled/sliced fruit, nectars and purees. Another option is to infuse your liquor with fruit by chopping the fruit and soaking it in the liquor for several days before you make your punch.

Be sure not to automatically exclude “veggies”-that-are-actually-fruits, like cucumber (which is in the famed Pimm’s Cup punch) and tomato (Tomato juice, gin, Tolstoy’s Sip, celeriac root and basil simple syrup make a tasty tippler.).

Any type that tastes good chilled will work, but think about the flavor pairing you’re creating with fruits and other ingredients when you select your base tea. Usually, a stronger tea will contribute more to your tea punch.

Brew your tea at double strength (same temperature and time, but double the amount of tea leaves) if you’d like a stronger tea flavor or more of a “tea drunk” feeling from your punch.

Liquor
Dark rum is the most popular liquor for punches, but a mixture of rums can make a fantastic base. Some people prefer vodka, whiskey, tequila or gin as a base. (Vodka is more neutral, so it can work with pretty much anything. Gin needs a more herbaceous or dark tea pairing to work well).

Some mix auxiliary alcoholic ingredients, like brandy, fruity or creamy liqueurs like Curacao or Bailey’s, and wine (often sparkling wine or port). You can also skip the alcohol for a less tipply tea punch, or opt for less common punch liquors to suit your drink’s flavor profile. For example, sake would be ideal for a Nishi Sencha cucumber mint punch. 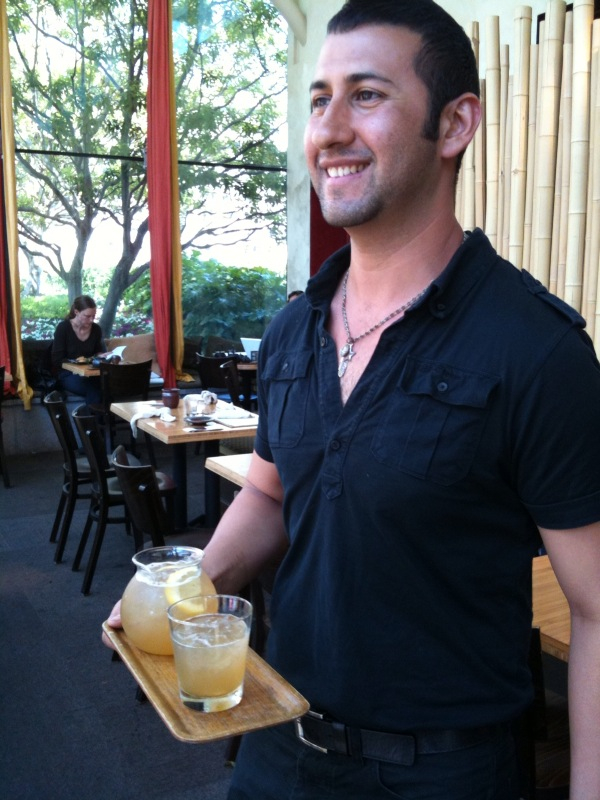 Generally, warming spices are best in Black Tea punches, but don’t let that limit you. You can infuse your liquor or tea with the spices, and/or use them as garnishes. I love innovative garnishes, like clove-studded orange wheels or vanilla-bean-speared ginger.

Tea can also be used as a spice in tea punches if you grind it in a spice grinder until it’s fine like Matcha, or if you use it to rim the glasses in which you’re serving the punch. Just dip the rim of the glass in a shallow pool of honey and then dip it into a shallow bowl of tealeaves. You can also half-rim the glass for ease of drinking.

Sweeteners
Our favorite is Samovar Sweet Crystals, an organic evaporated coconut palm nectar. Brown sugar is a classic punch sweetener. You can branch out with honey, sugar in the raw, agave nectar, etc. Homemade simple syrups can add additional flavor components – simply add a spice, herb, flower or fruit to the mix when you boil it down, or replace the water with brewed tea.

A basic guideline for measurements comes from a rhyme from Barbados: “One of Sour, Two of Sweet, Three of Strong, Four of Weak.” It means 1 part citrus juice, 2 parts sweetener (this could be a regular sweetener or an alternative, like soda or fruit juice), 3 parts liquor, and 4 parts water (or, in our case, tea).

Above all, let your taste buds guide you. Ultimately, the goal is in experimenting with tea punches is to enjoy tea in exciting, new (and, if desired, intoxicating) ways.

Samovar Life
Posted in:
How To
Join 50,000 Other ♥ Tea Lovers
Follow Us