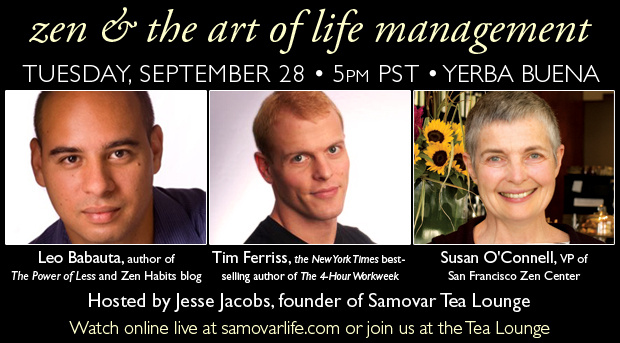 With the ever-increasing presence of technology and overcast of distractions in our daily lives, life management has become an art. We are all faced with many of the same challenges, but the big question is, how do life experts find solutions to encounter a calm, fulfilled life? Never before has the ancient world of Zen Buddhism practices been so necessary as today. Much of the beauty of Zen is in its simplicity, and the average person can embrace a more balanced daily life through having time for contemplation. Join three of today’s foremost life management leaders as they discuss their own creative solutions for a more focused mind. Technology has led us to excessive multitasking, and the expectation that we always need to be digitally “connected.” Find out how these experts focus inward amid busy schedules and challenges in business to stay connected with themselves, family and friends.

Below is biographical information on each of the participants in the “Zen & The Art of Life Management” event:

Timothy Ferriss, nominated as one of Fast Company’s “Most Innovative Business People of 2007,” is an angel investor (StumbleUpon, Digg, Twitter, etc.) and author of the #1 New York Times, Wall Street Journal, and BusinessWeek bestseller, The 4-Hour Workweek, which has been sold into 35 languages. His blog is one of Inc. Magazine’s “19 Blogs You Should Bookmark Right Now“, and it has been ranked #1 on the Top 150 Management and Leadership Blogs list, based on Google PageRank, Alexa traffic ranking, Bing results, Technorati authority, Feedburner subscribers, and PostRank. Tim has been featured by more than 100 media outlets–including The New York Times, The Economist, TIME, Forbes, Fortune, CNN, and CBS–and has been a popular guest lecturer at Princeton University since 2003, where he presents entrepreneurship as a tool for ideal lifestyle design and world change.

Leo Babauta is the creator and writer of the Zen Habits blog. Zen Habits is about finding simplicity in the daily chaos of our lives. It’s about clearing the clutter so we can focus on what’s important, create something amazing, and find happiness. It also happens to be one of the Top 25 blogs in the world, with about 200K readers, is uncopyrighted, and goes well with anything chocolate. Zen Habits features three powerful articles a week on: simplicity, health & fitness, motivation and inspiration, frugality, family life, happiness, goals, getting great things done, and living in the moment. And it’s all ad-free, with no cookies, Flash or spam.

Leo Babauta is married with six kids, and is currently living in San Francisco. He is a writer and a runner and a vegan. He also created mnmlist.com (on minimalism) and Write To Done (for writers and bloggers). He’s the author of a new best-selling book, The Power of Less: The Fine Art of Limiting Yourself to the Essential, in Business and in Life. He has also published the following books: Zen To Done, The Simple Guide to a Minimalist Life, and Handbook for Life.

About the San Francisco Zen Center

San Francisco Zen Center was established in 1962 by Shunryu Suzuki-Roshi and his American students. Suzuki-Roshi is known to countless readers as the author of the modern spiritual classic, Zen Mind, Beginner’s Mind. The purpose of San Francisco Zen Center is to make accessible and embody the wisdom and compassion of the Buddha as expressed in the Soto Zen tradition established by Dogen Zenji in 13th-century Japan and conveyed to us by Suzuki Roshi and other Buddhist teachers. The Zen Center’s practice flows from the insight that all beings are Buddha, and that sitting in meditation is itself the realization of Buddha nature, or enlightenment.

Today, San Francisco Zen Center is one of the largest Buddhist sanghas outside Asia. It has three practice places: City Center, in the vibrant heart of San Francisco; Green Gulch Farm, whose organic fields meet the ocean in Marin County; and Tassajara Zen Mountain Center – the first Zen training monastery in the West – in the Ventana Wilderness inland from Big Sur. These three complementary practice centers offer daily meditation, regular monastic retreats and practice periods, classes, lectures, and workshops. Zen Center is a practice place for a diverse population of students, visitors, lay people, priests, and monks guided by teachers who follow in Suzuki Roshi’s style of warm hand and heart to warm hand and heart. Zen Center programs also reach out to the community, helping prisoners, the homeless, and those in recovery; protecting the environment; and working for peace. Suzuki Roshi’s disciples and students of his disciples now lead dharma groups around the country.

In the spirit of Beginner’s Mind, Zen Center has long been a quiet force of cultural dynamism and change, with a dedicated history of reconsidering conventional wisdom and pushing the boundaries of cultural traditions and modes of thinking.