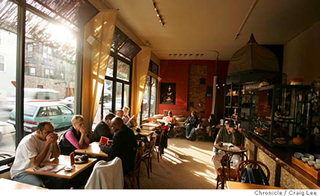 For decades, weary holiday shoppers in San Francisco’s Union Square have sought afternoon refuge from maddening crowds and over-weighted shopping bags with a pot of tea and a quick bite at places like the Westin St. Francis, Palace Hotel, Ritz-Carlton or the Rotunda at Neiman Marcus.

For $20-$45 per person, shoppers can sink into elegant surroundings, sip tea or Champagne and listen to a live harp or piano. But while tea may be a holiday ritual for some, others are taking to the 5,000-year-old brew year- round. In the last year, several teahouses have opened, all with the hopes of turning us on to something a bit more exciting than the years-old tea bags we’ve had stashed in the cupboard.

“Drinking tea is such a soothing ritual, and afternoon tea is a perfect break,” says Michael Mina of Restaurant Michael Mina in the Westin St. Francis Hotel. The restaurant takes over from the Compass Rose, a bastion of holiday tea.

“Children come here with their families during the holidays, and the tradition is established

Danville teen Natalie Campo and her friend Katie Maute took the afternoon off school recently to join their mothers Rebecca Campo and Julie Maute for tea at the Palace Hotel before hitting stores. This is the second year they’ve done tea together, and plan to keep up the practice annually.

The holiday tea menus of the sort they indulged in offer an assortment of brews accompanied by a multi-tiered tray of small sandwiches layered with the likes of smoked salmon, egg salad or cucumber plus sweets such as almond cakes, lemon meringue tartlets or opera cake. And of course, there’s always the scone and its accompaniments.

Taking a tea break at some of the newer teahouses can be just as soothing, but in a different way. Instead of scones and tartlets, there might be curry or flatbread.

A flurry of discoveries about tea’s health benefits, plus renewed appreciation of its ancient heritage, has pushed tea to the fore. Its antioxidants appear to lower cholesterol levels, improve cardiovascular health and help guard against some cancers. And some experts believe its flavenoids may inhibit the growth of plaque on teeth. 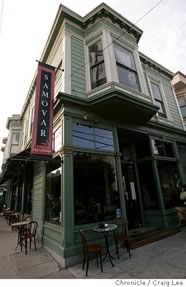 “People talked about a tea trend five years ago, but things are finally happening,” says Alice Cravens, former assistant to the late Helen Gustafson, the Berkeley tea lady who started Chez Panisse’s tea program. Cravens continues to supply tea to Chez Panisse as well as Zuni Cafe and Delfina, among others, and is looking to open up a teahouse of her own in San Francisco.

There’s certainly room for growth. While tea is the most consumed beverage in the world next to water, it is ranked only seventh in the United States. But according to Joe Simrany, president of the Tea Council of the U.S. A. Inc., a shift is taking place. In the last 10 years, wholesale sales of tea have surged to over $5 billion, from under $2 million, and while there were only a couple hundred teahouses in 1990, there are now about 1,500 around the country.

Says Eliot Jordan, tea director of Emeryville-based Peet’s Coffee & Tea, “People are trading up. They’re getting tired of bad coffee and boring tea and are looking for a flavor alternative.”

Beyond black and green

With tea, there are plenty of alternatives. From black to white, green to oolong, red to pu-erh, tea can be light-colored and delicate or full-bodied and complex depending on where it is grown and how it is processed. Peet’s sells 28 kinds of tea while other stores like the Imperial Tea Court and Samovar Tea Lounge in San Francisco often carry 100 teas or more.

“Learning and talking about tea is a great ice breaker,” says Jesse Jacobs, co-owner of Samovar, which opened in June 2003. “I can’t tell you how many blind dates we see in here. It’s a good alternative to meeting at a bar, and people immediately have something to talk about — what tea to try, how it tastes, etc.”

It doesn’t hurt that this latest generation of tea rooms look really good. Samovar‘s woven grass floors, warm woods and spice-colored accents make it look more like a hip cafe than a stuffy tea room. Celadon in Albany is a modern Zen oasis with a colored concrete tea bar, bamboo walls and stone fountain. And May Hung’s DynasTEA, a cozy shop on Russian Hill, greets customers with vibrant yellow and green walls offset by creamy accents and dark wood furniture.

Teavana, an Atlanta-based chain that opened on Polk Street in April, has warm yellow walls, airy space and approachable staff, all of which have made J. K. Harper a convert. Annoyed by the lines at his normal coffee shop one Saturday morning, Harper crossed the street to Teavana and hasn’t looked back. Now a nearly daily visitor, he likes the choices and the aesthetics.

“Having a lacquer tray arrive at my table with a pot and a glass mug is a much nicer way to spend my money than having a paper cup shoved in my face,” he says.

Tea snacks are a lure, too. Samovar offers a seasonally changing menu ranging from breakfasts like a polenta-ginger waffle ($5.95) to dishes like baked tofu with miso chutney ($3.75), a bento box featuring smoked duck ($8. 95) and tea-seared tuna ($10).

Whether you want to incorporate tea into your daily life or simply enjoy it as a holiday tradition, one thing is certain. The ritual forces the drinker to slow down and sip, something most of us could use at this bustling time of year.