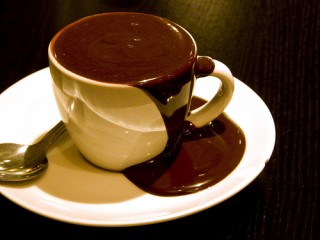 Tea and chocolate: Some marriages are made in heaven
posted by Robert Wemischner on TChing.com | 06.24.09

It’s not surprising that tea and chocolate make good tasting partners. Although the cacao plant’s terroir and the tea plant’s terroir only overlap north and south of the equator, the saying “what grows together goes together” is at least partly true.  (Cacao grows within 20 degrees of the equator while tea is cultivated up to 43 degrees north and 30 degrees south of the equator.)  As a recent tasting revealed, “theobroma” – aka the food of the gods (and mortals too) – proved to be a fitting and sometimes even stellar partner with a wide variety of teas served hot enough to melt the chocolate luxuriantly on the tongue.

The plan was to taste six chocolates straight from their wrappers from five different manufacturers – three U.S. producers (Theo, a bean-to-bar producer based in Seattle that sources beans from Madagascar and the Ivory Coast and two Hershey-owned subsidiaries, Scharffenberger, cacao origin unspecified, and Dagoba, using cacao from Dominican Republic) and two other companies (Kallari, an Ecuadorian producer using organic beans, and long-established Valor, based in Spain, sourcing beans from Ghana, Panama, and Ecuador).

The teas were courtesy of Jesse Jacobs of Samovar Tea Lounge in San Francisco.  My intention was to pair each of the chocolates with each of six different tea types:

1. Downy Sprout white tea from China, which was completely overwhelmed in this dark chocolate setting (I am convinced that few, if any, white teas should be consumed any way but alone)

2.  The single-flavored variety, Jasmine Pearl green, which stood up beautifully to the creamy richness of the Kallari 70% bar, contributing its layers of luxurious floral personality to the inherent caramel, nutty notes in the chocolate

There were some surprises, with the standouts showing a well-balanced dialogue of flavors and mouth feel.  Memorable pairings included the following:

•   Kallari with the oolong, which accentuated the positives in both the tea and the chocolate

•    Japanese Sencha, which benefited from a preliminary washing of the leaves in room-temperature filtered water before the brewing proper.  Its most compatible partner was the Theo 75% dark chocolate bar (total percentage of cocoa solids and cocoa butter) using beans from the Ivory Coast.  Despite a slightly gritty texture (probably due to a deliberate shortened conching time during processing), the chocolate’s citrusy notes prevailed and, in fact, persisted when tasted with the Yunnan black as well.

•    Pu-erh came into its own with the Scharffenberger extra dark 82% bar, which suggested caramelized citrus rind, a kind of marmalade essence that lingered long after the last bit of chocolate disappeared from the palate.  Only strips of candied orange peel dipped in this chocolate would have made a better pairing with the tea.

So many teas, so many chocolates, so little time…